A particular hobby of mine is arguing about whether or not Earth is flat. I know I’m very unlikely to ever convince a Flat-Earther that Earth is approximately spherical and orbits the Sun, but I still like coming up with arguments for it.

An Introduction to Flat Earth Cosmology

According to the Flat Earth movement, Earth is a flat disk, with the North Pole at the centre, and an “Ice Wall” (known to most of the world as “Antarctica”) around the edge (a few Flat-Earthers claim there are more continents beyond the Ice Wall).

The orbits of the Sun and Moon in the Flat Earth model
https://aplanetruth.info/23-why-was-nasa-created/flat-earth-images/

The Equator is a circle halfway between the North Pole and the Edge.

The Sun and Moon move around the Earth in circles in 24 hour cycles, moving directly above the Tropic of Cancer on the Northern Hemisphere’s Summer Solstice, the Tropic of Capricorn on the Southern Hemisphere’s Summer Solstice, and the Equator on the Equinoxes. At all other times the circle around which the Sun moves is between the Tropics, presumably according to the latitude at which the Sun is directly overhead on that particular day. This gives us a day/night cycle, since the Sun only illuminates a certain area of Earth at a time, like a spotlight.

The Moon does not reflect the light of the Sun, but gives off its own light. According to some Flat-Earthers, moonlight actually reduces the temperature of objects it falls on, as demonstrated in some highly questionable experiments on Youtube (Of course anyone who has any knowledge of anything about energy or light or anything like that will realise that this is almost certainly nonsense. What in fact appears to be happening is that areas in the “moonshade” aren’t as exposed to the sky, so don’t lose as much heat that way.).

This whole system is contained within a dome or “firmament”, made of glass, water, or some other, similar substance. The stars and planets are lights shining from the firmament.

In this universe, gravity is not a real force (there is simply a physical law that denser materials sink below less dense materials), and there is no such thing as Space (photos taken from Space are fake and astronauts are lying).

Missing the point of Flat Earth

Globe-Earthers arguing with Flat-Earthers often miss the point of the Flat Earth model, failing to realise that it operates within a very different paradigm to Proper Science. Here are some examples of common ways they do this:

Pictures of Earth from Space

This is a mistake often made by Globe-Earthers who are relatively new to the Flat Earth scene. You post a photograph of Earth from Space, claiming that picture proves Earth is round. The problem is that this assumes that whoever claims to have taken the photograph is basically trustworthy. The Flat Earth Movement, however, is characterised by a total distrust of mainstream scientific authorities, especially NASA, who are a key part of a huge conspiracy to hide the true shape of Earth for one of various reasons. Flat-Earthers generally claim any photograph of Earth from Space is “CGI” (and in fairness to them, most of them actually are composites).

Pictures of the “curvature” from high altitudes

Another common Globe-Earth argument is to show a picture of Earth from, for example, a weather balloon, and claim that the curvature of the Earth is visible in it. This is distinct from the “photograph from space” argument, since Flat-Earthers agree that the photographs are taken from an altitude it is actually possible to reach.

The Flat-Earth response is generally that the apparent curvature results from the nature of the camera lens. In this case, they’re actually often right. At the altitudes reached by weather balloons, the visible curvature of the Earth is still very small. It’s well-known that wide-angle lenses result in a seemingly curved horizon, even at low elevations, and this is often the result of most of the “curvature” you see on photographs from GoPros on weather balloons. For example, in this video of a weather balloon launch, you can see the horizon bending all over the place due to lens effects as the balloon goes up.

If you ask a Flat-Earther this, they’ll probably show you a picture of an Antarctic ice shelf meeting the sea, and tell you that’s the Ice Wall. This leads to a very silly argument, since the photo does not illustrate anything except that Antarctica exists, which neither side actually denies. The Flat-Earthers just have the peculiar habit of calling its coastline the “Ice Wall” (As an aside, Flat-Earthers often claim that the Antarctic Treaty says nobody’s allowed to visit Antarctica. This is bollocks).

“Why are the other planets round?”

This one particularly annoys me, because people who ask this have clearly not even tried to understand the Flat Earth model. Possibly the most fundamental tenet of the Flat Earth movement (even more important than the claim that Earth is flat) is the rejection of the Copernican principle (the idea that Earth is not the centre of the Universe). The idea that Earth should be spherical because the other planets are spherical already assumes that the other planets are a bit like Earth, and a basically heliocentric understanding of Earth’s position in the universe, which is not a part of Flat Earth cosmology.

The key mistake Globe-Earthers make in Flat Earth arguments is approaching the question from within the mainstream scientific paradigm. Earth is not the centre of the Universe, the laws of physics are applicable everywhere and at any scale, scientific authorities are usually trustworthy, etc.

In this game, the only experimental evidence that is allowed is that from experiments that you (or others amateurs) are able to perform yourself. Things you can personally observe. Anything that you’ve just learnt in school, or read about, is not acceptable evidence that Earth is round.

Good evidence that the Flat Earth model is wrong

Here are some pieces of evidence that the Flat Earth model is incorrect that are acceptable within the rules of the Flat Earth Game. Flat-Earthers generally struggle to challenge these without just getting things wrong.

Things disappearing over the horizon

One of the earliest ways people have shown that the surface of Earth is curved is by watching distant ships. You will notice that, as a ship moves away, the hull disappears first, and the mast is the last part visible on the horizon. 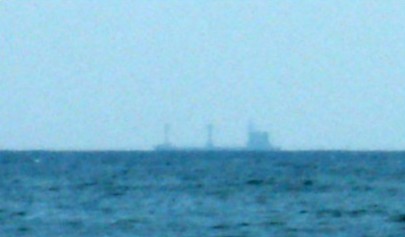 A ship partly obscured by the horizon
By Anton [CC BY-SA 2.5 (https://creativecommons.org/licenses/by-sa/2.5)%5D, from Wikimedia Commons

This is difficult to explain on a Flat Earth, but makes perfect sense on a globe.

Another example, that is very easy to observe, is a sunset. The bottom of the sun is very clearly the first part that ceases to be visible, and then the top. If you watch a sunset through a filter that removes glare (I probably don’t need to tell you this, but don’t look at the sun without a filter), you will see that the angular size of the Sun (how much of the sky it takes up) changes very little.

A time lapse of a sunset, showing the sun being obscured by the horizon.
By Odd Høydalsvik, http://www.hoydalsvik.net/astrofoto/sun/timelapse.html

This is totally at odds with the Flat Earth model’s version, where the Sun recedes into the distance.

On a related note, in the Flat Earth model, you should be able to use a telescope to see the Sun at night. I have yet to see anyone try it.

Stars in the Southern Hemisphere

In the Southern Hemisphere, the stars appear to move in circular paths around a central point (the South Celestial Pole). 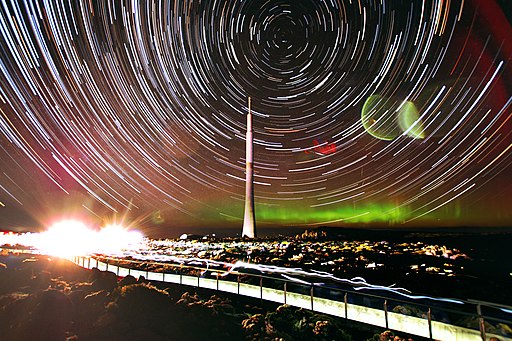 In the Flat Earth model, all the stars move around the North Pole.

Flight paths and shipping routes in the Southern Hemisphere

The route of a flight from Perth to Johannesburg, which makes sense on a globe, but would bend weirdly outwards on a flat Earth
http://flatearthdeception.com/flights-prove-the-flat-earth-deception/
Screenshot from https://www.flightradar.co.uk/

In the Northern Hemisphere, flights and shipping routes are explained quite well. Great circles (the shortest paths between points along the surface of a sphere) on the Northern Hemisphere of a globe become straight lines on the Azimuthal Equidistant Projection used by the Flat Earth model. In the Southern Hemisphere, however, it’s a very different story. The great circles routes followed by ships and planes end up curved outwards towards the Edge, while if they were following straight lines on a flat earth, they would travel towards the Centre and then back out.

You can argue convincingly, based purely on things that you or other amateurs can observe, that the Flat Earth model is incorrect. That is not, however, to say that I know with certainty that it is round. My position is that, given the evidence at my disposal – things disappearing over the horizon, the apparent symmetry of the Northern and Southern Hemispheres, the implausibility of a vast, international conspiracy to hide the true shape of the Earth, etc. – the Globe model has far greater explanatory power, and is simpler and more satisfying. These advantages are so great that you would need very convincing evidence to persuade me that Earth is flat, and I’ve yet to see any evidence like that.