It’s that time of year again, when people keep thinking it makes sense to ascribe modern nationalities to someone from Classical Antiquity. In past years, I’ve seen people variously claiming St. George was Turkish, Syrian, Palestinian, Israeli, Greek, Egyptian and Georgian (He was born in Cappadocia, now South-Eastern Turkey, and later moved with his mother to her homeland in the Roman province of Syria Palaestina, which occupied the Levant and also a large part of what is now South-Eastern Turkey). Whatever the case, he was certainly not English, and has nothing to do with England apart from being the patron saint of it.

The cult of St George certainly has a long history in England, going back to before the Norman Conquest. He was associated with the Crusades, and then was made Patron Saint of the Order of the Garter when it was founded by Edward III in 1348, ending up with him definitively supplanting the East-Anglian King Edmund the Martyr as Patron Saint of England. Given that he has nothing to do with England, and is a rather unoriginal choice for a national patron saint, being a patron saint of Russia, Georgia, Portugal, Turkey, The Crown of Aragon (inherited by Catalonia and Aragon), Greece, Palestine, Ethiopia, The Republic of Genoa, and Moldova, as well as farmers, soldiers, scouts, herpes, and syphilis. England has plenty of its own Saints that could be used instead. Here are some possibilities: 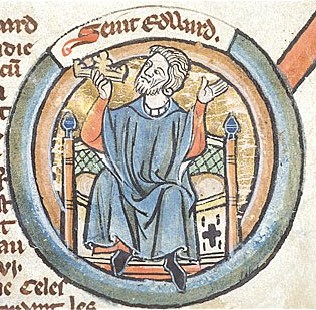 Edward the Confessor seems an obvious choice, as the only canonised King of England, as a patron saint of Kings of England, and as one of the unofficial patron saints who were displaced by Saint George.

He was crowned king in 1043, having spent most of his life up to that point in exile in Normandy whilst England was under Danish rule.

During his reign, Edward spent much of his time trying to make sure the Vikings didn’t invade, trying to make sure his Earls didn’t depose him, and appointing the Norman abbot Robert of Jumièges as Archbishop of Canterbury. Perhaps most notably, he built Westminster Abbey, in a decidedly Norman, Romanesque style.

He died in January 1066 with no heir, leaving 3 possible successors, all with decidedly tenuous claims to the throne, to sort it out among themselves. Of course, this being 1066, William, Duke of Normandy ended up coming out on top.

He was canonised in 1161 and nobody is entirely sure what he did to deserve it apart from being just generally sort of religious. A lot of Anglo-Saxon Kings became unofficially venerated, but this was the first time one had been actually canonised. He became a patron of the Kings of England, and the namesake of 8 of them (although ironically overlooked in their regnal numbers).

Thomas Becket, in a stained glass window in Canterbury Cathedral
Renaud Camus from Plieux, France [CC BY 2.0], via Wikimedia Commons

Thomas Becket (not Thomas à Becket, which seems to have come about long after his death to make him sound more like the theologian Thomas à Kempis) was an extremely important Medieval saint, and a prominent figure in the politics of 12th century England.

Becket was born in Cheapside in 1119, the son of a merchant. In a remarkable example of social mobility for the time, he ended up becoming Archdeacon of Canterbury, and was recommended to Henry II for the position of Chancellor.

As Henry II’s Chancellor, he was extremely obliging and Henry, looking to rein in the power of the Church in England, appointed him as Archbishop of Canterbury. In a surprising turn of events, however, Becket ended up taking his role far more seriously than Henry had expected, and refused to sign the Constitutions of Clarendon, which would have given the King a lot more power over the Clergy. Henry ended up putting him on trial, digging up some financial offences from when he was Chancellor. Becket was convicted, and fled to France.

Eventually, in 1170, the Pope persuaded Becket and Henry to make up, and Becket was allowed back to England.

Later that year, however, Henry got the Archbishop of York, the Bishop of London, and the Bishop of Salisbury to crown his son, Henry the Young King, in accordance with the French tradition of crowning the Heir Apparent. Since the Archbishop of Canterbury is meant to crown Kings, Becket excommunicated all three of them, and went on something of an excommunicating spree. This, famously, prompted Henry’s outburst of “Will no-one rid me of this turbulent priest?” (although the exact words are disputed). Four knights, interpreting this as an order, turned up at Canterbury Cathedral, pulled out their swords, and hacked the Archbishop to death, smearing his brains across the floor when they’d finished with him.

Becket took just over 2 years to be canonised, and Becket’s tomb in Canterbury Cathedral became an major pilgrimage destination.

Whilst Thomas Becket is one of the most important English saints, I’m not sure I’d want a patron saint who was martyred for his conviction that the Church should be above the law.

A statue of Augustine of Canterbury, at Canterbury Cathedral
User:Saforrest [CC BY-SA 3.0], via Wikimedia Commons

Lots of countries already have a great converting saint. Germany has Boniface, Ireland has Patrick, Norway has Olaf, etc. It would make a lot of sense for England to do the same.

The Roman province of Britannia had become Christian, along with the rest of the Roman Empire, under Constantine. However, in 410, the Roman Legions withdrew from the Province in order to defend the more central parts of the Empire from the Barbarians that were overrunning it. This left room for the pagan Angles, Saxons and Jutes to take over the Southern and Eastern parts of the Island, now England. As a result, while the Celtic peoples in the West remained Christian, albeit with a weird way of calculating the date of Easter.

According to Bede, the whole thing started when Pope Gregory I saw some Anglo-Saxon boys in a Roman slave market. Being the Pope, his eyes were of course immediately drawn to their angelic fair hair, blue eyes and pale skin. Remarking “non angli sed angeli” (“not Angles, but angels”), he resolved to convert these people to Christianity, and dispatched Augustine to do the job. Another account is that King Æthelberht of Kent, whose Frankish wife was a Christian, asked the Pope to send missionaries. Either way, Augustine was sent to convert the Kingdom of Kent to Christianity.

Augustine arrived in Kent and made himself the Archbishop of Canterbury. Æthelberht was baptised, and the Anglo-Saxons gradually became Christian, even if he didn’t get the Celtic Christians to agree on the date of Easter.

An image of Bede from the Nuremberg Chronicle
Public Domain. See page for author. via Wikimedia Commons

Possibly the only notable person ever to come from Sunderland, Bede was sent to a monastery at the age of seven. At the age of 14, everyone in the monastery except him and one other person died of plague, leaving them to run the monastery themselves. He seems to have spent most of his adult life writing books about history and how to calculate the date of Easter. He died in 735, having written enough, especially his Historia Ecclesiastica Genti Anglorum (Ecclesiastical History of the English People) to be one of the most useful sources on the history of Anglo-Saxon England.

An illustration by William Blake titled Joseph of Arimathea among the Rocks of Albion
William Blake [Public domain], via Wikimedia Commons

Joseph of Arimathea appears in all four Canonical Gospels, as the person who offers his tomb to be used to bury Jesus. His significance to England is rather mysterious, but there are several stories, appearing first in the Middle Ages, according to which he visited Britain after the death and resurrection of Jesus and founded a church at Glastonbury.

Going further, there are also stories tied into Arthurian Mythology, in which Joseph brought the Holy Grail with him on that trip. The Glastonbury Thorn is supposedly a descendant of the hawthorn bush that, in the same legend, sprouted from Joseph of Arimathea’s staff when he planted it in the ground on Wearyall Hill, Glastonbury.

Another legend says that Joseph of Arimathea was a tin merchant and visited Cornwall, the centre of tin production in ancient Europe, bringing a teenage Jesus with him. An elaboration of this story says that Jesus actually taught the Cornish tin miners how to extract tin from its ore. The story of Jesus visiting Britain is referred to extensively by William Blake, most notably in And did those Feet in Ancient Time.

All this is, of course, total nonsense and obviously never happened, but I like it when a country has national myths like that. The Joseph of Arimathea myths are important parts of England’s cultural heritage and deserve to be celebrated.

In modern times, Edmund the Martyr is a very obscure saint. He’s mostly getting a mention here due to his popularity in the Middle Ages, and the fact that he was a patron saint of England before St. George was adopted by Edward III.

Very little is known about his life. He’s supposed to have been born in 841, and became King of the East Angles in 855. In 869, England was invaded by the Viking Great Heathen Army, who killed Edmund. The story concerning his martyrdom (which is probably nonsense) is that he refused to meet the Vikings in battle, instead throwing down his weapons and allowing himself to be tied to a tree and shot full of arrows before being decapitated.

When people were looking for his head, the story goes that it called out “here! here! here!” until they found it, with a wolf guarding it from other animals.

Bury St. Edmunds, the location of his shrine, became a very popular pilgrimage destination in the Middle Ages, until the abbey was destroyed in the Dissolution of the Monasteries, and he was venerated as a patron saint of England until Edward III replaced him with St. George.